On a recent trip to Costco, I bought myself a Cuisinart Ice Cream Maker.  It was around $30 for the machine and is electric.  I had my Mom’s old one that I remember trying to use as a kid, but I’m not sure how that worked because it was manual and the electric one has to go for about half an hour to do a batch-I can’t imagine I turned the crank for half an hour straight.  So I thought I would splurge and buy a new one for fun.

I made two batches of ice cream; one chocolate and one berry.

The Chocolate recipe called for homogenized milk, heavy cream, sugar, eggs and melted chocolate.  Everything was cooked, cooled and then put in the machine for around 30 minutes.  When it came out it was the consistency of soft serve so I stored it in a glass dish and waited until it was firm. It froze really well and scooped nicely.  This is what it looked like. 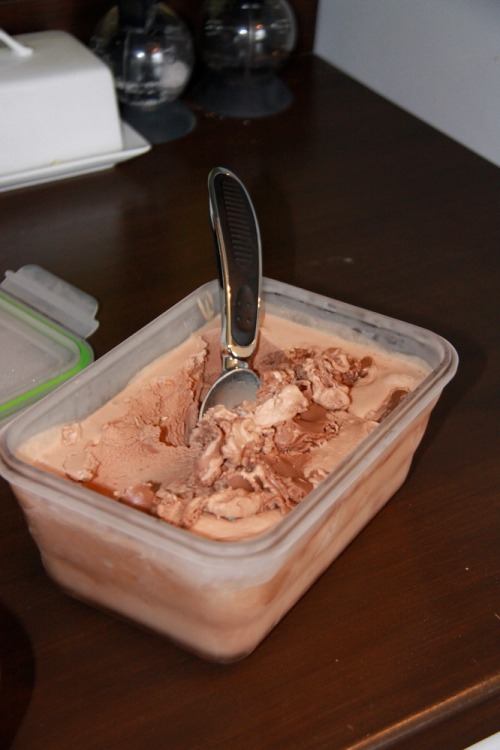 After I finished making the Chocolate, I started wondering whether the eggs were really necessary since they added 2 extra, long steps to the process- cooking and cooling.  I quick googled it and there were a lot of different opinions so I thought I would try it myself to find out.  I made a berry mix with the same ingredients as the chocolate minus the eggs and chocolate and plus mixed frozen berries.

I mixed the ingredients in a blender and poured it straight into the machine.  I let it go for the same time as the chocolate and it was about the same consistency at that point.  I think it would have been really good to eat right then, but I put it in a glass dish and further froze it.  Turns out the eggs really do make a big difference.  The berry tasted really good, but it had more of an icy consistency to it instead of creamy.  It was much harder to scoop as well.  This mix might have made really good popsicles or also would have been good if eaten right away.  It was much quicker though so if I was ever doing this with Myles for quick fun when he is older I would probably just do it the same way.  If you want real ice cream though I would go with the cooked version.

If you are thinking of getting an ice cream maker I think it is important to note that it was more expensive for me to make my own than to just buy it, but it is a fun summer activity and is nice to know exactly what goes into it.

2 responses to “Ice Cream has Eggs in it?”