3 days after my last post I went into labour in the night and by 11:35am(to be exact) we had the newest member of our family-Leah Abigail. She weighed 8 lbs 4 oz. and was 21.5″ long.  I loved her just as much as I loved Myles when I first saw him.  Aaron and I feel so blessed by these two little creatures and she is the perfect addition to our family; Myles thinks so too!  She has been incredibly easy on me considering the apprehension I had about a second child and all the warnings I had about how my next one would be trouble since Myles was such an easy going baby.  She’s very relaxed and lets Myles continue to take center stage with his active 2-year old personality.  He’s very good with her too, taking time from zipping around to sit and hold her and popping over to her throughout the day to give her a kiss.

Leah’s delivery was the polar opposite from Myles’.  Before I say too much about it, I feel the need to say that I can only attribute the smoothness of what took place to answered prayer (my own prayers and others’), because I didn’t think after what happened with Myles that I could have such a delivery.  I was in labour with Myles for 60 long hours and after being stalled at 9 cm for over 12 hours, a transfer by ambulance from one hospital to another and a transfer of care from my midwife to a doctor in Stratford, he was born by cesarian section.  This was very dissapointing for me because I had prepared for a natural delivery and really believed that everything would go well.  Because it was major abdominal surgery the recovery was rough(even though for a C-section my recovery went very well), but it was harder for me emotionally.  I can’t really explain why because I had the end product of a healthy baby which was the most important thing and I knew that we had tried everything we could before agreeing to the section.  I geuss I felt that my body had failed at doing what it was supposed to do.  It took me a long time to heal from that and I did.  I won’t ever know why things happened the way they did but I do know that it doesn’t really matter because God was in control the whole time and Myles came safely into the world.  Also, Myles was not going to come out.  As critical as I was of a c-section,  it may have been the tool that gave me a baby I would have lost a couple hundred years ago.

Fast forward to this pregnancy.  I was really worried about having to have surgery again.  I obviously didn’t enjoy the process and to make matters worse, I would have a 2 year old at home that I would need to care for.  I spent the better part of the pregnancy researching VBAC(vaginal birth after cesarian).  I researched ways to make sure baby was in the right position to ease labour, I hired a doula, I chose an obstetrician and hospital that encouraged VBAC, read countless studies that proved the safety of labouring after a cesarian and watched films (More Business of Being Born more times than I should admit) in order to convince myself that I could do it.  I realize that this isn’t the approach everyone would want to take and I totally understand that.  Part of me thought of the 60 hours I spent becoming an exhausted zombie last time, only to end up with my stomache sliced in half and was ready to sign up for an elective section because at least then I could go into it well rested and have a plan for who would help me afterward, but another part of me knew that I needed to have a trial of labour to help me get over what happened with Myles.  I am not at all judgemental toward women who choose to have a repeat cesarian.  I think in many cases this is the right decision and I have compassion for those who make that decision.

So after 9 months of reading, watching, praying, I went into labour at 2 am on the 22nd, 5 days overdue.  This was around the same time that I went into labour with Myles so I tried to go back to sleep and wait out the long haul I figured I had ahead of me.  Within an hour I gave up trying to sleep because the contractions were alreay quite painful.  By early morning we called our doula who came and helped me labour at home until my Mom got to our house around 8:30.  We rode down to the hospital with the doula which was a wonderful help because it was a 40 minute drive to London and my contactions were around 3 minutes apart by the time we got there so I was in quite a bit of pain and Aaron was pretty focussed on speeding.  We got to the hospital around 9:30 I think and I was 4-5 cm.  When I told them my plan for pain management was nothing I almost immediately regretted it but the next 2 hours went by so fast I didn’t really have time to change my mind.  Less than an hour later I was 6 cm and they broke my water at which point contractions started coming on top of one another so I hollered that I needed something to help me deal with the pain.  I got some laughing gas which didn’t do the same thing that it did when I used it with Myles.  At least it helped relax me a bit though and not long after my OB came in to check me and I was 9.5 and he said I could start pushing.  I gave up on the gas at that point and did what they told me because this part was all new and I was in way too much pain to think straight.  It all happened very quickly and then she was there on top of my belly instead of inside.  I thought she was going to be a boy.  Aaron guessed girl all along because of the trouble she gave me with the morning sickness at the beginning.  He was right.  It’s funny because even while they were prepping the room for the baby to arrive, we kept thinking “uh huh, we’ve seen this before, soon we will be taken to the OR”  but that didn’t happen and it was strange how easy it all was.  It was painful-not easy in that way, just simple.  Right after she was born Aaron even said “That was easy!”  to which he got a glare (jokes).  Ayway I feel so thankful for how things went.  It really was a healing experience for me; that sense of failure is gone and I know my body is capable of so much.  But the odd thing is that this birth really makes me appreciate my body for what it went through last time.  A C-section is not an easy thing to go through and to be able to recover from a major surgery like that while caring for a new life is a really incredible feat for any woman who does it.

I thought I might show some pictures to compare my two experiences with childbirth but BE WARNED…. I look AWFUL(remember when I said I felt like a zombie, well I also looked like one) in the pictures from Myles’ birth! I am probably crazy to post these but I just want to emphasize how much better I felt after this time around!

Okay… so here is our first family picture with Myles minutes after his birth, a picture with us after I got back to my recovery room an hour or so after having him and a lovely picture of me, swollen and looking like I got the crap kicked out of me over 24 hours later. 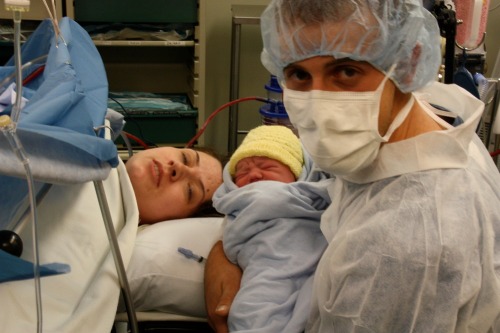 Now here we are in our first picture with Leah immediately after she was born(i.e. you don’t want to know whats happening left of the picture).  Then a picture with Myles and Leah only a couple of hours after her birth and a picture of us with her the night she was born after I had been up, walking around, showered and changed my own clothes(these simple things still amaze me). 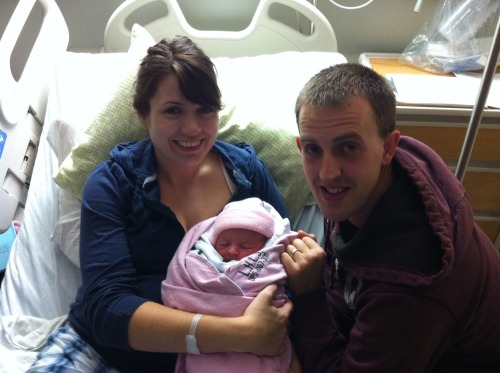 You can probably see from those pictures the difference a good delivery makes and why I am so chipper about the whole thing.  Feel free to laugh at how brutal I look in the picture the day after Myles’ birth especially..Aaron and I already spent our fair share of time laughing about it.

On a final note…look how much my two little munchkins look like each other.  The picture in the background is Myles around the same age sleeping in a similar position.  She is kind of just a girlier, darker haired version of him at this point.

So we have just been enjoying our time as a family of 4 since Leah’s birth and I have also been working on a couple different projects which I will post about sometime in the near future.