I last left you with a panorama of the main floor in the process of being sanded, and (where on earth has the time gone) that was almost two months ago.  We have been busy chipping away at stuff, and are almost done the kitchen.  Below you can see a bit of a progression, from when Aaron started applying the poly to the beautifully smooth, fresh new, really old, wood floors. 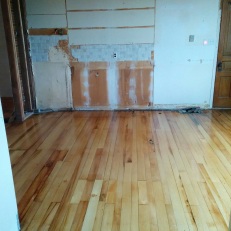 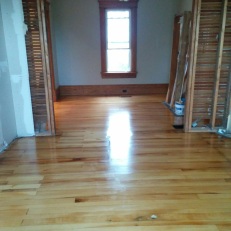 This happened at about 2 am on a weeknight when Aaron had to be up at 5:30 the next morning.  We have had inadequate sleep through this process; it’s totally not healthy, it’s self inflicted and we feel we have aged significantly over the past 4 months.  If I know you personally, I’ve probably mentioned this.  I feel like we are complainers a bit.. it was completely our choice to purchase this property and we feel so incredibly blessed to have had the means and skills to tackle the project.  Still, we are weary.  It’s been a good summer of seeking God in our exhaustion. Matthew 11:28 gives me comfort-Come to me, all who labor and are heavy laden, and I will give you rest.  And then Psalm 28:7 sums up our situation nicely-The LORD is my strength and my shield; in him my heart trusts, and I am helped; my heart exults, and with my song I give thanks to him.  I don’t know how we haven’t completely burnt out.  I’m not sure how we’ve accomplished as much as we have on our own.  I was just talking to Aaron earlier while he was tiling(it’s looking good!), and I was saying how everything is a bit of a blur, I remember taking possession of the house and having a bit of a panic attack (I’m not using that term lightly, I’ve honestly been dealing with anxiety) about the amount of sheer man hours we would have to put into this place.  And now looking around and seeing everything almost complete.  God’s hand has been in each step.  I make it sound like we fought a war or something.  I know it may not seem like that big of a deal just renovating a house, and it’s not really, lots of people do it every day and we’ve done it before too.  But for us, with 3 young children, it’s really been a challenge this time around.  And I’m relieved and so very grateful that we are nearing a season of rest, to some degree anyway.  Well, that was a bit of a sidebar but I need to give credit where credit is due.

Here’s Aaron with his beard that he grew partly because he’s always wanted to and partly because he didn’t have time to shave.  For real though, there’s our new floors and kids happy to be playing on finished floors! 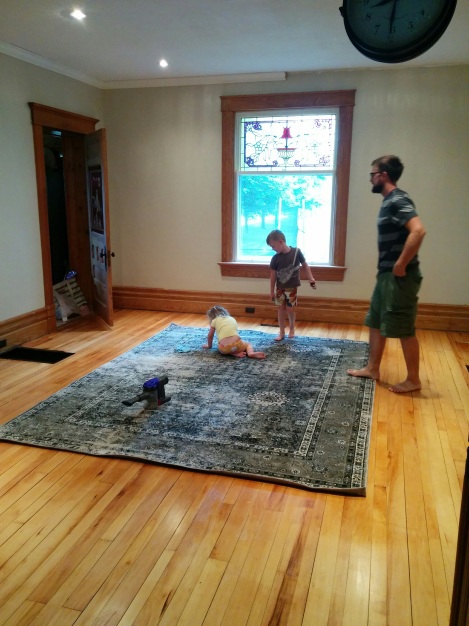 After we tore down the dropped ceiling in the kitchen we found a really important, load bearing beam.  It’s the one on the left.  So we decided to try a tray ceiling, with two beams going through it, we just built a false beam to match that really important one that actually is doing something.  And instead of drywalling the ceiling, we used inexpensive pine boards to do a planked effect-something we also did in the second floor hallway. 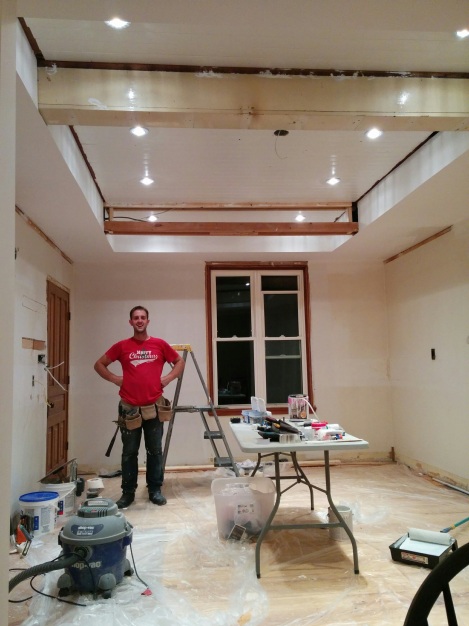 I painted the planks white because I didn’t want it to be too heavy feeling and because we were planning on doing wood beams, so I wanted some contrast.  Aaron also did a ton of electrical which looks nice a bright. 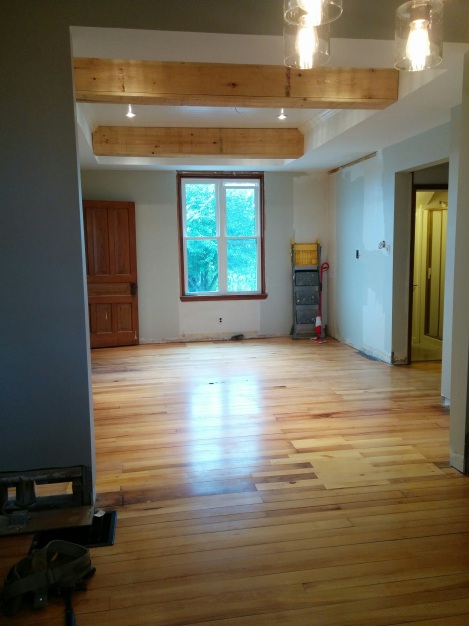 Here it is after we put the wood up on the beams.  They are much bigger looking than I was expecting, so we still may put crown across the tops of them to make them look a bit shorter.  You can see here where Aaron patched in the floors- it’s noticeable but it doesn’t bother me.  Once everything is in I don’t think that will be the focus, and the new boards will change colour over time.

This is where I will leave things.  We had the cabinets all in but no doors or drawers or anything that makes it look custom.  That is the exciting bit that really gives the character and makes it look like its not just a bunch of floating white melamine boxes.  Stay tuned-I’ll try not to take two months this time.