Where did the summer go?!  We are nearing the middle of October and our summer seems to have flown by in a fog of dust and paint fumes, but that’s okay, the end is in sight.  Our current house is sold and we are panning to move in a couple of weeks.  Some stuff has already been moved which means that the house is for the most part in a liveable condition.  We don’t have a functioning bathroom at the moment but probably by the end of this weekend we will.

So far we have ripped up all the glorious pink(and a bit of blue) carpet, ripped out a non load-bearing wall between the kitchen and dining room, ripped out the brick planters by the front door, ripped out the plywood kitchen walls and kitchen cabinets, drywalled the kitchen, tsp’d everything to get the nicotine off, painted all ceilings, painted all trim, painted all walls, replaced all light fixtures, added new pot lights, replaced outlets with grounded ones, replaced all light switches, laid new hardwood flooring in the kitchen to match the rest of the old strip oak in the rest of the house(more on this later in the post), sanded all the wood floors, stained and polyurethaned the floors, had carpet laid in the bedrooms, put a new kitchen in and gutted the bathroom which brings us to where we are now.  Aaron is currently working on mudding the new drywall in the bathroom.  It has been amazing to see the transformations that have taken place.  Everything feels fresh and new and I am really appreciating this new house and all it’s little bits of character.  I will do more detailed posts on each room once we are closer to completion.  This post will mostly be about the floors. 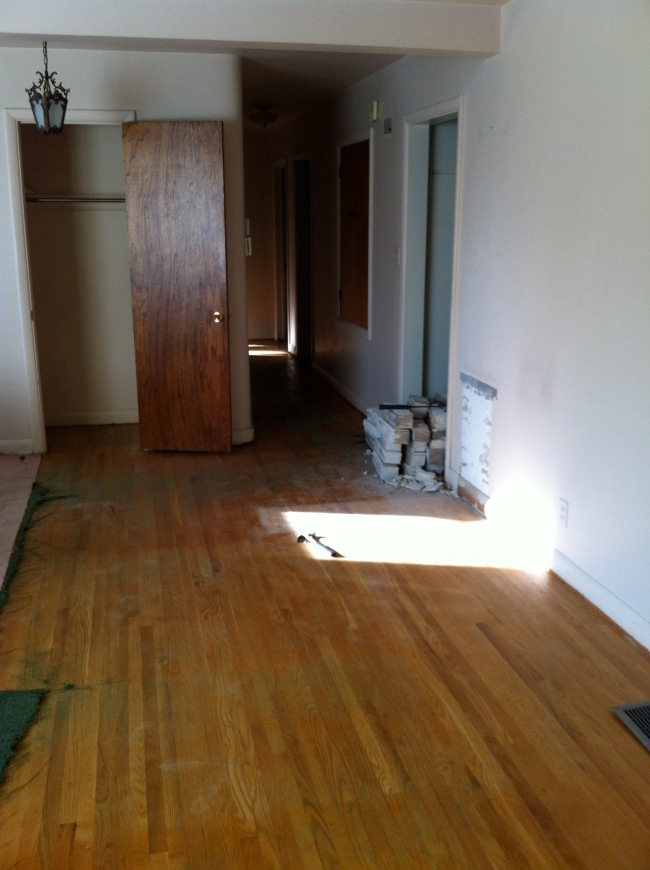 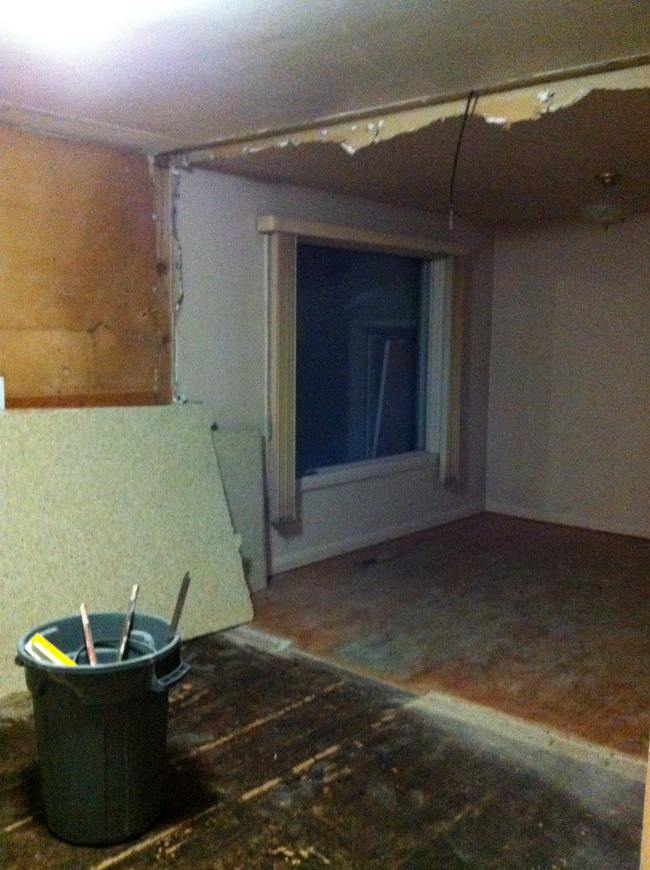 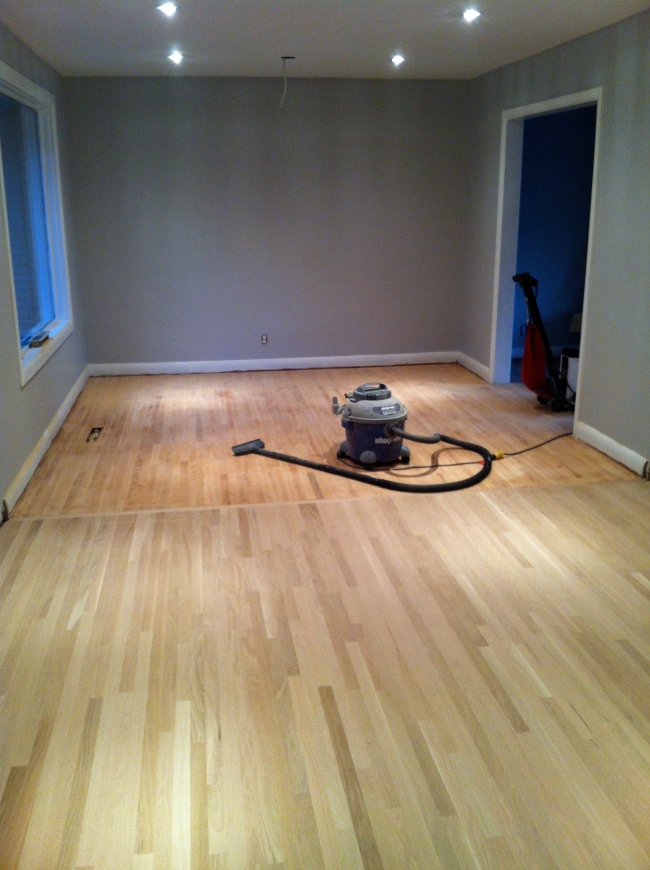 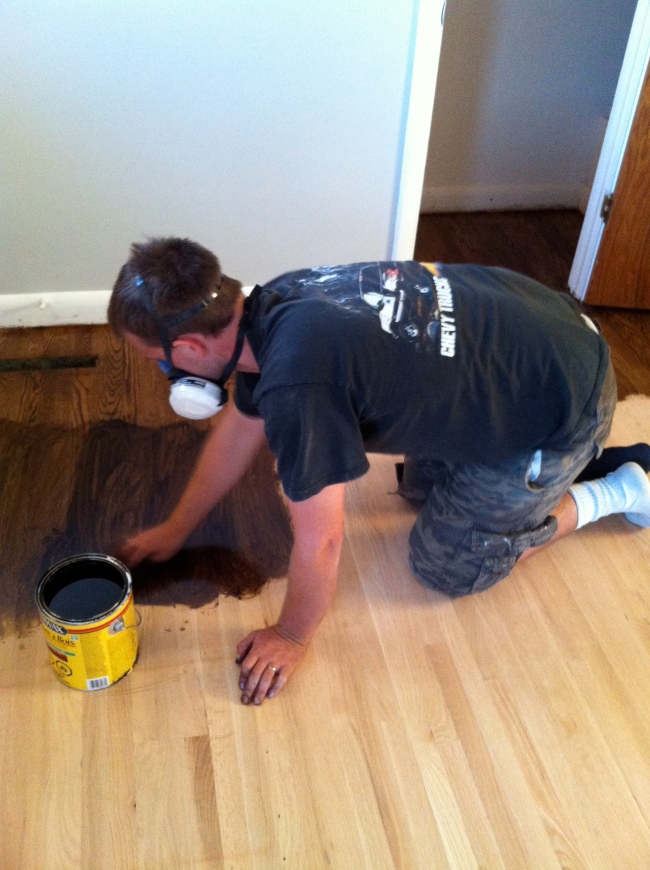 We are so happy with how the floors turned out!  Initially, we planned on laying all new hardwoods and were about to purchase them when we realized that the old hardwood was underneath the carpet.  Even once we knew there was wood in the living room we still almost went ahead with the new wood because we didn’t expect them to be in such good shape.  The wood also didn’t continue into the bedrooms or kitchen and we really wanted a seamless floor throughout the entire upper level.  After ripping up all the carpet, we saw that the floors were in great condition and had never been sanded down. We couldn’t go ahead with new floors once we realized how much we would save by refinishing what was already there.  I was able to compromise on my seamless floor preference for a few reasons.  The first was(as previously noted) money.  We had a budget for the house and new floors fit into it but we are cheap so coming under budget is a very exciting prospect.  I also started thinking about the practicality of carpet in a bedroom.  In some ways, mostly cleanliness wise, it isn’t very practical, but in other ways it is a practical choice for a bedroom.  It is comfortable underfoot, warm in the winter, good for noise reduction and when I sneak in to peak at my kids at night and its easy enough to vacuum.  Plus it was a lot cheaper than new hardwood.  It won’t have near as long a life span but for now it works and can always be changed down the road.  As for the kitchen, we found the same oak strip hardwood from Hoffmeyer’s mill in Sebringville, ON.  They were great to work with and even lent us a nailer to use for free.  They suggested that white oak would be a better choice for a kitchen because it stands up to moisture better than red oak.  We were pretty sure we already had red oak but knew we were staining it all a darker colour so the difference in grain wouldn’t be too obvious.  We chose to put a strip across the transition between the old and new floor as opposed to trying to weave it in because that was what we were more capable of doing, but also because that transition would be right near where the kitchen cabinet peninsula was going to come out so it would be a natural spot for a transition.  Additionally, since the grain would be a bit different we thought it would look better not to have the boards weaved into one another.  We used one coat of Minwax dark walnut and 3 coats of Minwax Polyurethane in a satin finish.  I LOVE the satin finish.  It feels so nice and smooth underfoot, like it has talc in it or something (actually I think it maybe does).  I walk around the house in bare feet and to me a glossier finish would feel sticky on my feet, but the satin just lets your foot glide along it.  These are the things that make me happy :).  I also really like the colour.  I had originally wanted something a bit darker but so many people warned me about dark floors showing dirt and dust so I think this is a good medium colour; dark enough to satisfy my desire for dark but light enough to satisfy my desire for low maintenance.  The kids being able to sit on the floor was a milestone.  Up until this point Myles had to be either wearing shoes or sitting on the work-couch and Leah had to be in her exersaucer or jolly jumper.  Look at that excited expression of freedom on her face!

We still have quite a bit to do but it really is encouraging to see what has been accomplished up to this point. Still on the list of to do’s is:

prime and paint the bathroom walls and ceiling

put the vanity, toilet and mirrors etc. in the bathroom

putty and paint some of the trim

replace all doors and knobs

I am really excited to show a reveal of the kitchen but I am going to wait until we have the countertop on and I will also try to take some decent, non-iphone pictures of it.

2 responses to “Time Flies, Here is an update finally.”